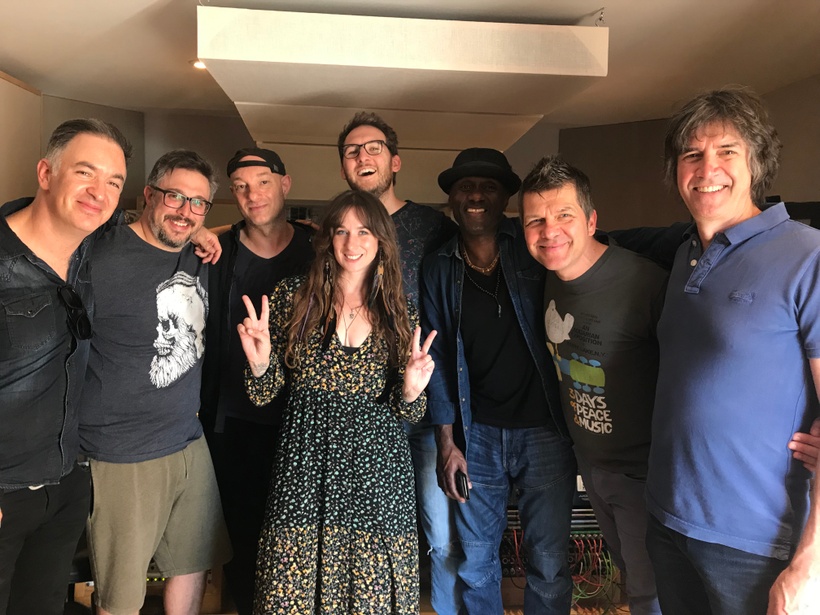 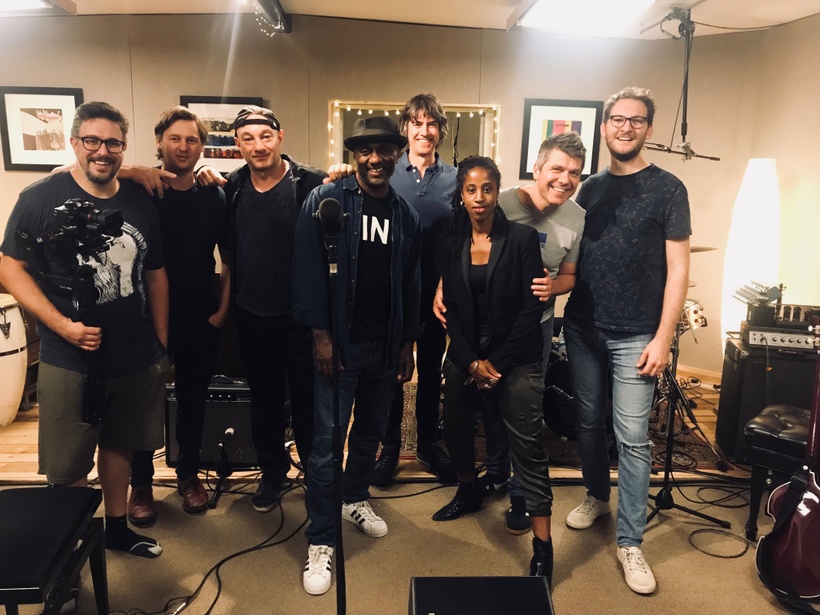 Dear Patreons, what a year it was and it is now drawing to a close. The last three 2019 videos we’ve released were another Jade Like The Stone original (‘Happiness’) and two videos with vocalist Louise Clare Marshall presenting her renditions of the classic ‘You Don’t Know Me’ (Ray Charles) and ‘Through the Fire’ (Chaka Khan). You might recognize Lou from the Jools Holland Band – look out for her at this years Hootenanny on BBC – a regular event for her!

We are super-pleased how ‘Happiness’ has come out – especially as on the day the guitarists we’ve booked for the session had to cancel in the wee hours of the morning as he slipped a disc and had to go to hospital. These are the moments that are not evident in our videos – all the sub-stories that go along with creating a Masterlink Session.

It was a very busy morning that day – the sessions customarily start at 11:00 and I normally have to leave my house around 9:00 to buy lunch for the boys and girls – courtesy of YOU – and get to the studio. So as you can imagine – finding a stand-in  for Terry (the guitarist booked for the first half of the day) this early in the morning was a challenge.

However, luckily for us guitarist Adam (Goldsmith) not only was available he also rose to the event and delivered a great performance on the the Jade songs, all the more impressive as, of course, he’s never heard the tunes before. I wonder how much it helped that he even had a solo spot on ‘Heavy’ – overall I think we captured the energy of the situation really well.

This is one of the exciting aspects of creating Masterlink Sessions – although the core team does know each well – we do not know what the energy of new musicians and artists will bring to the sessions. Often these are first time encounters and the resulting energy is precisely what we are trying to capture – in there is the seed of excitement in my opinion. Talking to many musicians and fans of the MLP sessions the word ‘fresh’, ‘real’ and ‘exciting’ have come up a lot – so I think we are doing something right here.

Another one of those spontaneous moments was when drummer Mike suggest for Jade to play the opening of ‘Happiness’ on acoustic piano – this was completely unplanned and we’ve never had this situation before, i.e. the main artist singing and playing piano, then getting up to use the stand-up mic. This has come out super-cool despite the fact that the original thought was for Jade to play this tune on Autoharp – this is how I first heard the tune – Jade singing and playing the Autoharp. However, on the day the Autoharp was still resting somewhere from the gig on the previous night, I assume:-) Here is the to the power of spontaneity (AND the skills to pull it off!).

Drummer Mike Sturgis and myself have known Louise Clare Marshall for many years now – we first met when Lou was singing for The Staks Band and then move on to the Jools Holland Band (and singing BVs for many artists along the way, one of them being Beverly Knight who the Staks have recently recorded with). The Masterlink Sessions started with the wish to invite our fellow musician ‘mates’ who are operating in our circles but we don’t see enough of – so a nice opportunity to strengthen our community and strengthen existing relationships and of course, forge new ones.

Lou was an obvious choice and we are pleased our crammed diaries (haven’t met any musicians recently that aren’t ‘super-busy’) finally matched up this year and we were able to record two songs. Lou opted for two classics in the end and we are super-pleased to have recorded ‘You don’t know me’ and ‘Through The Fire’ – two classics – a soul standard (Ray Charles being one of the many artists to interpret this song) and 80s Chaka Khan anthem. 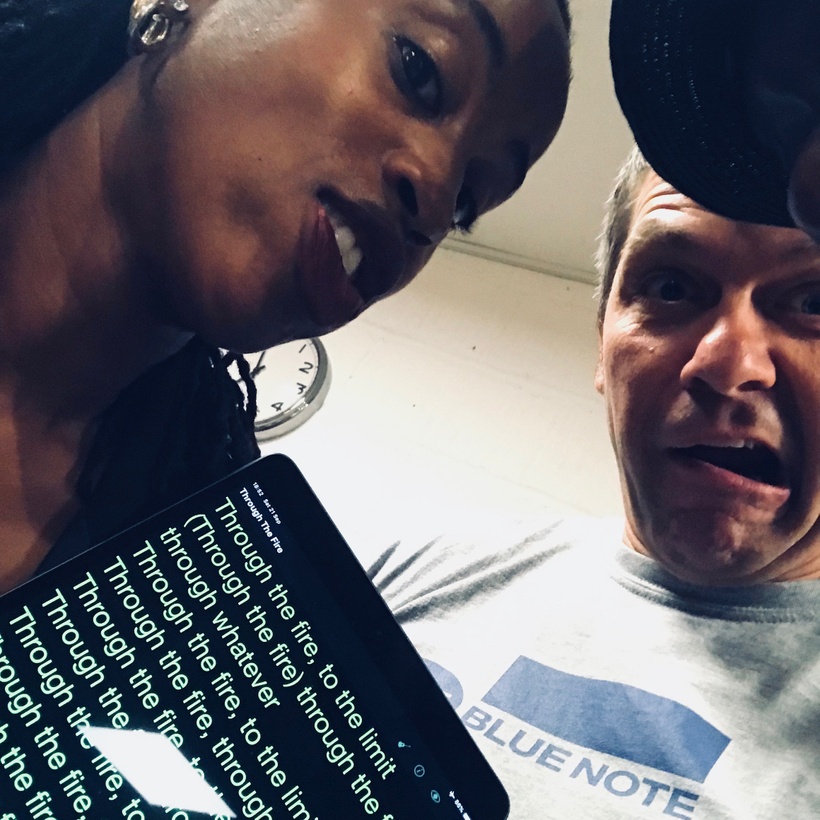 The harmonic structure of ‘You don’t know me’ could be interpreted in many different ways and Lou’s keen ear helped us to derive at the final shape – in particular I enjoy the musical interaction of Lou and Mike (Outram) in the tag of the tune.

‘Through the Fire’ is a classic with an enormously well-crafted and ‘bombastic’ arrangement – to create a ‘stripped down’ version was a challenge – however, it is evident what a great song it is regardless of instrumentation and production – Lou expertly singing this difficult tune on top of our rhythm section (the two Mikes, Karl, Anders and myself) has resulted in a really cool and chilled out vibe.

Yet again I feel we broadened our music spectrum of our Masterlink Sessions and it seems we have covered a lot of ground this year – instrumental and vocal led music in many different styles – Funk (of course), Soul, Jazz but also Blues and yes, Rock! We have all the intentions to keep this open spirit going for the next year and provide you, our patrons, and the listening/watching unknown public out there with an offering that is both deep and wide in outlook! Let us know your favorite videos of 2019 as it will certainly inform us for the exciting new year of filming to come!

We’ve already booked a range of very exciting artists and literally can’t wait to share it all with you! Naturally a MASSIVE BIG THANK YOU for supporting us this year and we hope to see you on this channel in the next year! 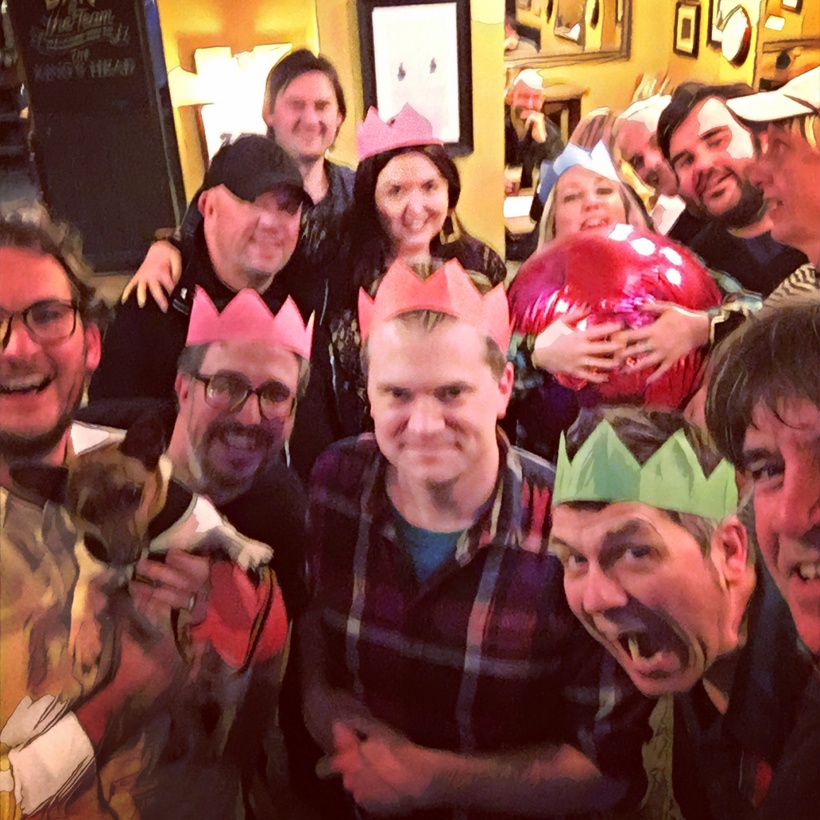 All we are saying | Concert for Ukraine | Live concert + T-shirts

Dear all, Customarily the Masterlink Sessions house band (a.k.a. Redtenbacher's Funkestra) operate happily as a…

Happy holidays! 3 videos & free downloads
The Masterlink Sessions team (Leo, James and Stefan) and all the awesome musicians and artists wish you a merry Christmas, happy holidays and a BIG thank you for all your support in 2021. Let's celebrate with 3 videos & free downloads.
Back To Top
We use cookies on our website to give you the most relevant experience by remembering your preferences and repeat visits. By clicking “Accept All”, you consent to the use of ALL the cookies. However, you may visit "Cookie Settings" to provide a controlled consent.
Cookie SettingsAccept All
Manage consent